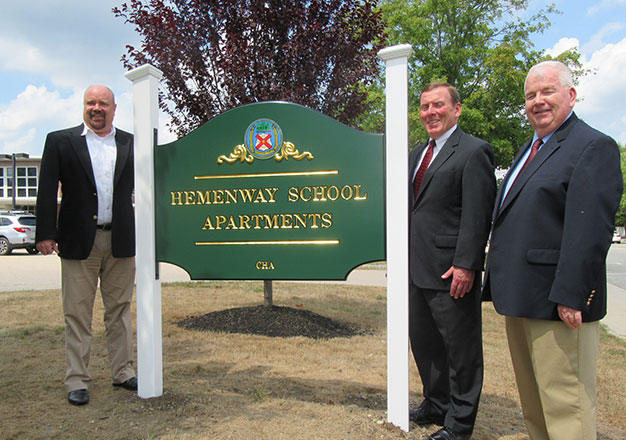 “We’re extremely pleased with the new signs,” said Mark Roy, executive director of the Canton Housing Authority. “We’ve received lots of positive comments from residents. Bank of Canton’s generous gift allowed us to replace not only the signs at Hagan Court and Rubin Court, which was our original plan, but also the sign at Hemenway School Apartments as well. We’re very grateful.”

In addition to the buildings’ names, all three signs feature Canton’s official town seal and gold leaf. The previous signs had prompted complaints by town residents due to their poor condition.

“The Canton Housing Authority does a lot of important work to help our local seniors,” said Bank of Canton President and CEO Stephen P. Costello, “and we’re proud to support this initiative. They’ve done a great job with these signs. Buildings are once again clearly marked for residents and their guests, and the top-notch quality and design of these signs really enhances the aesthetics of the area.”

Established in 1835, Bank of Canton is a Massachusetts-chartered mutual savings bank that offers its consumer, business and government banking customers access to a full array of deposit, loan, investment and convenience service options. As a mutual savings bank, the Bank has no stockholders; instead, profits are paid back to customers in the form of better interest rates, personal service and a vast array of financial products and services. Lending throughout Massachusetts, the Bank has branches in Canton, Quincy and Randolph, and Mortgage Centers in Auburn and Marshfield. The majority of the Bank’s assets have been used to meet the home mortgage and commercial financing needs of the communities it serves. All deposits at Bank of Canton are insured in full with at least $250,000 insured by the Federal Deposit Insurance Corporation (FDIC); all deposits above that amount are insured by the Depositors Insurance Fund (DIF). For more information: visit: www.ibankcanton.com. Member FDIC. Member DIF. Equal Housing Lender.