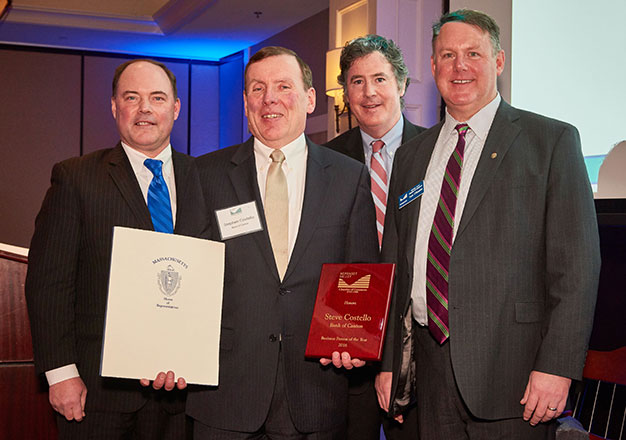 CANTON, Mass. (February 1, 2017) – Bank of Canton President and CEO Stephen P. Costello has been named “2016 Business Person of the Year” by the Neponset Valley Chamber of Commerce. In his letter of congratulations to Mr. Costello, NVCC President Tom O’Rourke wrote, “This award is presented to an individual whose personal guidance and leadership have made a positive contribution to the Neponset Valley community.”

The committee also recognized Mr. Costello’s work in other local civic and non-profit organizations, including his roles as chairman and board member of the Neponset Valley Chamber of Commerce, and treasurer of both the South Shore Chamber’s Economic Development Committee and the Canton Association of Business and Industry.

“It’s an honor to serve and support the businesses that are such an important part of our local economies,” said Mr. Costello. “As a lifelong resident of the Neponset Valley myself, I believe that our tremendous quality of life here can be attributed to the strong relationship between our residents, businesses, and local government. When we pull for each other, we accomplish great things, and our communities prosper as a result.”