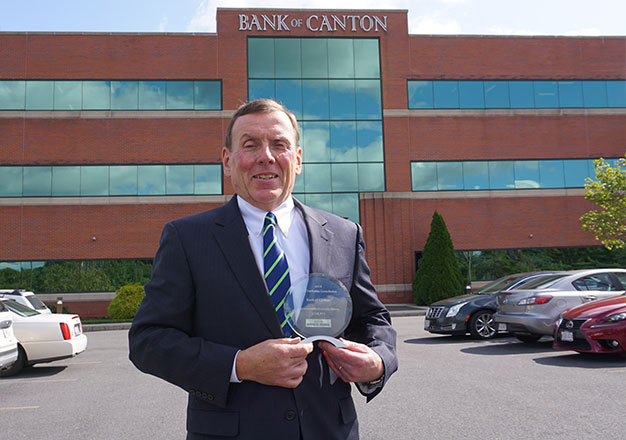 CANTON, Mass. (September 18, 2019) – Bank of Canton was recently recognized along with other honorees at the Boston Business Journal’s annual Corporate Citizenship Awards event, for ranking among the largest corporate charitable contributors in Massachusetts last year.

The Corporate Citizenship Awards, held at South Boston’s Capo Restaurant and Supper Club, recognized 105 businesses that gave at least $100,000 in cash contributions to Massachusetts-based charities or social-service nonprofits last fiscal year. In addition to Bank of Canton, honorees included multi-million dollar corporations and represented a range of industries such as healthcare, insurance, legal, accounting and finance, among others.

“We’re proud to receive the Corporate Citizenship Award,” said Stephen P. Costello, president and CEO of Bank of Canton, “and we share this honor with our customers: the terrific families, individuals and businesses whose patronage fuels our charitable giving program.

“The recognition we’ve received for our community involvement this year – first with the Greater Boston Community Contribution award, and now the Corporate Citizenship Award – is due to the people and businesses who bank with us,” Costello continued, “and we thank them.”

In June, Bank of Canton was honored at the 2019 Banking Choice Awards in Springfield, Massachusetts, for ranking second in the independent Banking Benchmarks® survey’s Community Contribution category for the Greater Boston region.

Since 2005, Bank of Canton has given more than $2.1 million to local charities and nonprofit organizations through donations and sponsorships. The bank’s contributions have helped fund financial literacy programs for children and seniors, educational workshops for first-time home buyers, and cultural and artistic enrichment programs. The bank’s employees hold leadership positions in several civic and non-profit organizations across the Greater Boston and South Shore areas as well.