/home/client/public_html_restored/wp-content/themes/boc-responsive/page.php 10277
Home / About Us / News & Events / Bank of Canton Awards Over $5,500 in Prizes (Randolph Release)

Bank of Canton Awards Over $5,500 in Prizes (Randolph Release) 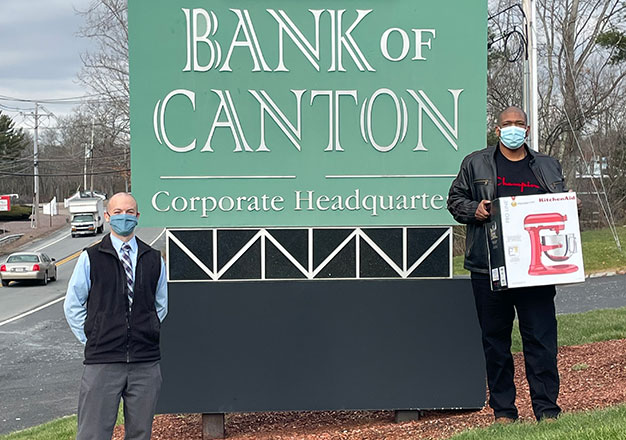 Bank of Canton’s vice president of marketing, Steven B. Young (left), presents Tremaine T. Perryman of Randolph with his prize.

“With so many holiday purchases being made online and over the phone this year, we knew lots of customers were going to be using their debit card,” said Stephen P. Costello, president and CEO of Bank of Canton. “The December Debit Sweepstakes was a fun and exciting way to thank our customers for using their debit card, and give a few lucky folks a great start to 2021.”

Bank customers who made 10 or more purchases with their personal Bank of Canton debit card between December 10-23 were automatically entered into the bank’s drawing, with each qualifying purchase counting as one entry. The bank registered over 44,300 entries in all.

Both new and longtime bank customers were among the randomly selected winners. Marilyn Ferreira of Mansfield, a business banking client of thirty years and owner of Danceworks in Canton, won the power tool set, while Canton’s Vanessa Galante, a relative newcomer of less than a year, received one of the stand mixers.