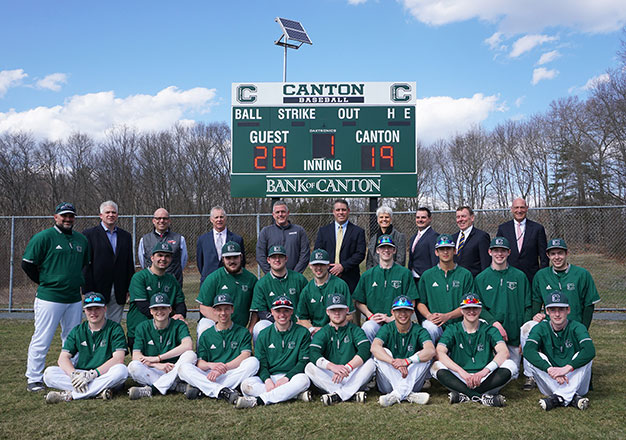 The state-of-the-art scoreboard is powered entirely by solar energy. Bank of Canton, the CHS Athletic Booster Club, and Canton Little League split the cost of the $15,240 scoreboard equally, with each group contributing approximately $5,000.

“Our Bulldog student athletes are fortunate to live in this supportive community,” said Danny Erickson, athletic director at Canton High School. “So many local businesses get involved in so many ways. This scoreboard is a great example; it’s not the first time Bank of Canton has financially supported the purchase of a scoreboard for our kids. We’re lucky to have them as industry leaders in Canton.

“I also want to acknowledge the hard work of the Canton Department of Public Works, the Canton Recreation Department, and the CPS Maintenance Department for getting the job done,” added Erickson. “It was a team effort.”

The Gibson Field scoreboard will be used by the high school and little league, as well as other local baseball groups.

“It’s exciting to see the scoreboard come to fruition after so much planning and hard work by Danny, the school and the town,” said Stephen P. Costello, president and CEO of Bank of Canton. “We were happy to contribute. Our students, boosters, families and fans deserve a state-of-the-art scoreboard that’s commensurate with the high quality of the CHS athletics program.”

Since 2005, Bank of Canton has given more than $2.1 million to local charities and nonprofit organizations through donations and sponsorships. The bank’s contributions have helped fund financial literacy programs for children and seniors, educational workshops for first-time home buyers, and cultural and artistic enrichment programs.