Bank of Canton, MusicCounts! in Canton, and CHS Alumni Association each donate $2,500 to help provide students with state-of-the-art lighting system 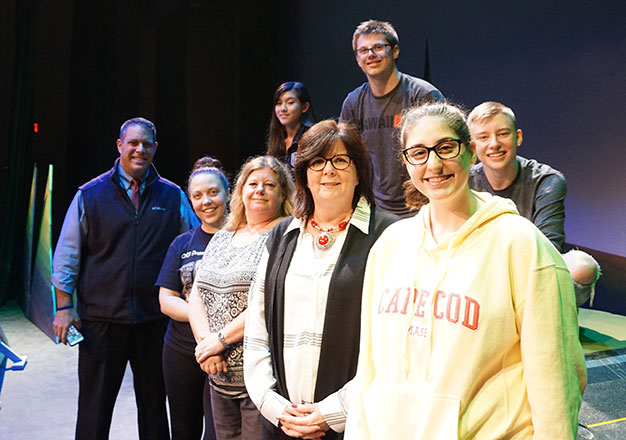 The new LED units were installed in the CHS auditorium earlier this month, and will be used to light the CHS Drama Club’s production of William Shakespeare’s “A Midsummer Night’s Dream,” which opens Thursday night, November 16.

“The new LED system is a wonderful gift made possible by the generosity of our alumni and parents, the supporters of our music programs, and Bank of Canton,” said Canton High School Principal Derek Folan. “The benefits of this upgrade extend beyond the high school to the broader community: this state-of-the-art system enriches not only the learning experience of our performing arts students, but also the audiences’ experience during every production and performance we host in our auditorium throughout the year. Its capabilities and visual effects are stunning.”

The LED lighting instruments offer more design options and greater efficiency than the older PAR can units. In addition to being very easy to program, the LEDs allow for unlimited color options and seamless transitions. More effects can be achieved with fewer units, which frees up other lighting fixtures for additional patterns and projections.

In addition, the LEDs are more energy efficient and generate less heat than PAR can units, making them safer and more cost effective over time.

“The hard-working student groups who perform in the CHS auditorium deserve a best-in-class experience,” said Stephen P. Costello, president and CEO of Bank of Canton. “Investing in, and giving our students exposure to, professional-caliber technology provides valuable learning experiences that can lead to greater opportunities in college and beyond. Bank of Canton has always been proud to support the arts in our public schools, and we’re excited to partner with MusicCounts! in Canton and the CHS Alumni Association to bring this technology to Canton High School.”

MusicCounts! in Canton, Bank of Canton, and the CHS Alumni Association are longtime supporters of the Canton public schools and community. The CHS Alumni Association has donated more than $18,000 to the high school over the past four years to cover much-needed items not included in the school’s budget. MusicCounts!, the parent/volunteer music booster group now in its 17th year, has raised more than $46,000 since 2014 from Canton parents and local businesses to benefit music programming and education in Canton schools. And Bank of Canton has given more than $1.75 million to charities and nonprofits through donations and sponsorships since 2005, including 36 different Canton-based organizations this year.