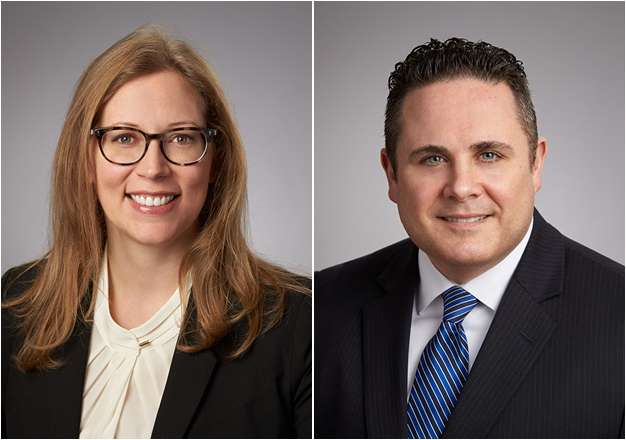 CANTON, Mass. (August 14, 2018) – Bank of Canton has appointed two new lenders to its commercial financing team: Lacey E. Teixeira, as vice president of commercial lending, and Evan F. O’Brien, as commercial lending officer. Both will work out of the bank’s 490 Turnpike Street headquarters in Canton.

In their respective roles, Ms. Teixeira and Mr. O’Brien will work with local businesses throughout eastern Massachusetts and beyond on commercial credit arrangements, including lines of credit, equipment and term loans, real estate acquisition and refinancing, construction financing (both residential speculative construction and construction-to-permanent), and SBA guaranty loans.

“Lacey and Evan are very talented additions to our team,” said Michael Lindberg, senior vice president and senior commercial lender at Bank of Canton. “They both possess substantial experience with all forms of commercial financing, which gives our department the flexibility it needs to best serve our clients.

“Lacey brings a particular expertise in C&I – Commercial and Industrial lending,” said Lindberg, “and Evan will be working closely with our professional builders on residential construction projects held for sale. Yet they both possess the skills, commitment, and perseverance necessary to pursue and close commercial financing deals of any kind. They can handle all opportunities, which is great for us.”

“Bank of Canton provides me with a great deal of freedom to serve my clients with a variety of financing tools,” says Ms. Teixeira. “I can assist a client with a C&I loan, and then, if they later seek financing for an investment real estate deal or development loan, I can help them with that too. There are no silos in our department. The continuity for clients is a big benefit of partnering with us.”

“I’m looking forward to having more direct interaction with clients,” says O’Brien. “In my new capacity, I’ll get to know a business not only from its financials, but also from talking with the people who run it. It adds another dimension to my role in the financing process.”

Ms. Teixeira graduated from Suffolk University with an MS in Finance. She lives with her husband, Dinis, and son, Xavier, in Foxboro, where she also serves as a committee member of The Sage School. Mr. O’Brien graduated from the University of Massachusetts, Boston, and is a resident of Dorchester.