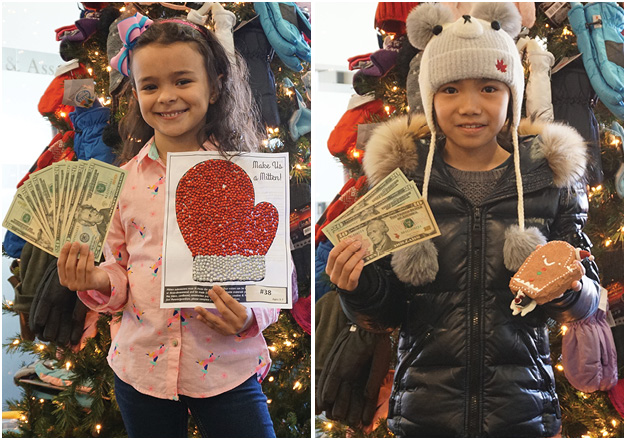 Six-year-old Sophia Medeiros (left) holds her winning entry in the 3-7 age bracket and her $200 prize. Eight-year-old YuJean Chen (right) was a runner-up in the 8-14 age bracket.

Six-year-old Sophia Medeiros of Weymouth won the $200 grand prize in the 3-7 age bracket, while eight-year-old YuJean Chen of Braintree won a $50 runner-up prize in the 8-14 age bracket. In all, the bank awarded two $200 grand prizes, two $100 Facebook prizes (determined exclusively by the number of Likes their entries received on Facebook), and eight $50 runner-up prizes. Other winners hailed from Canton, Randolph, Roslindale, Stoughton, Hanson and Pembroke.

The craft contest was part of Bank of Canton’s holiday promotion, which also included a free public showing of The Grinch at the bank’s 250-seat auditorium in Canton, and a mitten tree collection drive to gather winter clothing accessories to benefit Quincy’s Interfaith Social Services and other local charities.