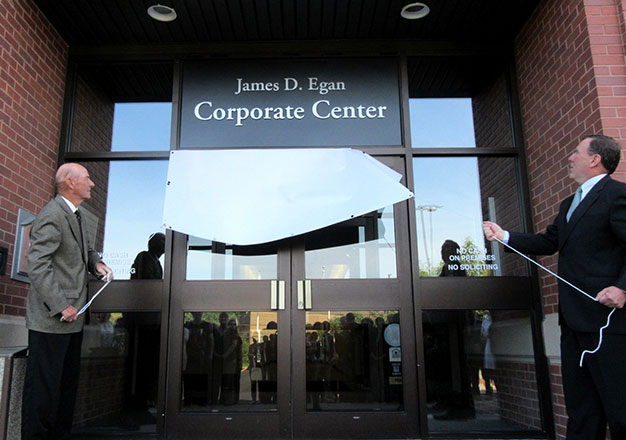 “In business, loyalty and integrity are the two of the most fundamental values required for long-term success,” said President and CEO Stephen P. Costello to those gathered at 490 Turnpike Street. “Today, we’d like to honor the man who exemplified those traits in his leadership of our organization for so many years. He grew our bank from a single office in Canton center to the bank we are today, with multiple locations serving multiple communities.”

Fellow board members and bank employees from across the Bank of Canton organization attended the unveiling ceremony Tuesday morning.

“I joined Bank of Canton in 1987 when there were far fewer employees,” said Mr. Egan, “and when we moved the bank’s headquarters into this building in 2003, I wondered if we’d need to sublet part of the space. But the bank continued to grow, and we needed it all.

“It’s a testament to the many terrific people who’ve worked here over the years,” Mr. Egan continued. “Because of their integrity – their hard work and dedication – we grew and achieved a lot of success. I appreciate their contributions, and I am very thankful for this honor today.”

Established in 1835, Bank of Canton is a Massachusetts-chartered mutual savings bank that offers its consumer, business and government banking customers access to a full array of deposit, loan, investment and convenience service options. As a mutual savings bank, the Bank has no stockholders; instead, profits are paid back to customers in the form of better interest rates, personal service and a vast array of financial products and services. Lending throughout Massachusetts, the Bank has branches in Canton, Quincy and Randolph, and Mortgage Centers in Auburn and Marshfield. The majority of the Bank’s assets have been used to meet the home mortgage and commercial financing needs of the communities it serves. All deposits at Bank of Canton are insured in full with at least $250,000 insured by the Federal Deposit Insurance Corporation (FDIC); all deposits above that amount are insured by the Depositors Insurance Fund (DIF). For more information: visit: www.ibankcanton.com. Member FDIC. Member DIF. Equal Housing Lender.