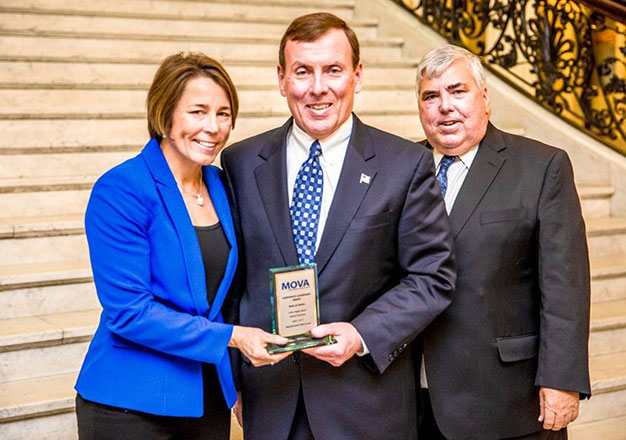 The following press release was issued by the Massachusetts Office for Victim Assistance (MOVA) on April 3, 2017:

BOSTON – During Victim Rights Month in April, Attorney General Maura Healey and the Massachusetts Office for Victim Assistance (MOVA) recognize individuals and agencies that have made significant contributions to victim rights and services.

Bank of Canton received this year’s “Corporate Leadership Award” for its commitment to supporting law enforcement, social service agencies, and others to improve community responses around crime prevention and intervention services.

Bank of Canton serves the greater Neponset Valley and South Shore area. Established in 1835, the bank has a history of supporting organizations and institutions that make its communities stronger, better places to live and work.

The bank regularly offers free use of its 250-seat corporate auditorium and facilities to law enforcement agencies such as Norfolk District Attorney Michael Morrissey’s office and local police departments. Over the past two years, more than 10 different organizations have hosted 35 events including trainings on identifying and responding to victims of human trafficking, bullying, how schools can respond to the opiate addiction crisis, and how police departments can improve relationships within communities.

Bank of Canton has provided more than $1.75 million in financial support to local charities and nonprofit organizations since 2005. The bank’s donations and sponsorships have helped fund financial literacy programs for children and seniors, educational workshops for first-time home buyers, and social services for victims and survivors.

Under the leadership of President and CEO Stephen P. Costello, Bank of Canton fosters a strong spirit of volunteerism – leading many employees to volunteer their time at civic and non-profit organizations that have benefited area schools, social services, and other charitable agencies.

“We’re truly honored to receive the inaugural Corporate Leadership Award from the Massachusetts Office for Victim Assistance,” said Bank of Canton President and CEO Stephen P. Costello. “We have an excellent working relationship with District Attorney Morrissey, and we’re pleased to support the tremendous work of his office and MOVA that benefits victims and survivors in our communities.”

“Community partners like the Bank of Canton are a force multiplier for the victim advocacy and law enforcement agencies they help,” said District Attorney Morrissey, who nominated the Bank of Canton for the award. “Not having to pay for first-class training facilities means that, with the limited funds we have, we can offer more training and resources to those on the street, in the schools and in the courthouses working with victims and other vulnerable populations.”

“During Victim Rights Month we have an opportunity to recognize those who help some of the most vulnerable and innocent among us. These individuals provide critical services to victims, and we are proud of the work they do in our communities,” said Attorney General Maura Healey.

“We are excited to award Bank of Canton with our Corporate Leadership Award to recognize their long-standing support of law enforcement in the communities they serve,” said Liam Lowney, MOVA’s Executive Director. “The bank serves as a critical resource by hosting joint trainings and networking opportunities that have led to more collaborative responses among systems addressing violence in the area. This private/public partnership is critical to improving public safety responses and building stronger communities and we are thrilled to recognize the bank for these efforts.”