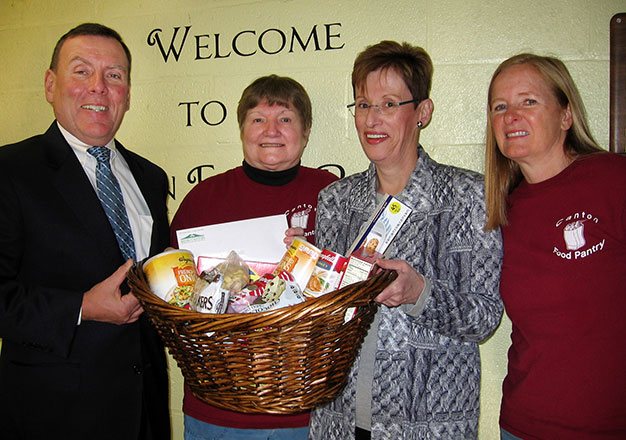 “The bank has always been so generous with its donations,” said Mary Buckley, co-director of the Canton Food Pantry. “It’s coming at such an important time of year for us, when we see many local families still trying to make the season special despite economic hardships. The bank’s contribution will help a lot of those people.”

The donation was funded entirely by Bank of Canton’s affinity credit card program. For every purchase and cash advance made by the Bank of Canton’s Town Card customers, the bank sets aside a percentage of the transaction amount into a fund dedicated to local charities and organizations serving the community.

“This donation to the Canton Food Pantry, like those before it, is possible because of our credit card program and our card holders,” said Stephen P. Costello, Bank of Canton’s president and CEO. “This simple program alone has generated over $100,000 over the past ten years. We’re proud to offer a product that makes an impact in the community and gives Canton residents an opportunity to support their neighbors in need.”

Bank of Canton’s branches at 557 Washington Street and 259 Turnpike Street in Canton also serve as drop-off locations for Food Pantry items. During business hours, the branches accept non-perishable food, personal care items, and household products. The Canton Food Pantry, located at 960R Washington Street (in the back of the Marilyn G. Rodman Educational and Administrative Center), accepts both perishable and non-perishable items on Mondays between 7:00 – 9:00 a.m. It is operated entirely by volunteers who wish to help their fellow townspeople.