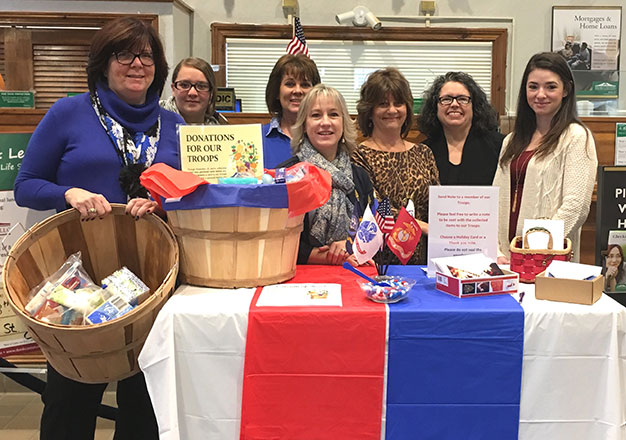 CANTON, Mass. (November 28, 2016) – Bank of Canton customers donated over 1,000 items to United States military service members and their families, as part of Bank of Canton’s “Month of Thanks” campaign that ran in November. Customers also dropped off non-perishable food items for the Canton Food Pantry, to complement the bank’s $10,000 financial donation.

“I’m extremely proud of our customers, in all of our communities” said Stephen P. Costello, Bank of Canton’s president and CEO. “The support for our collection drives this month was fantastic. Our team did a great job of getting the word out, and our customers and communities responded generously. We thank them, and I am certain our troops and neighbors in need thank them as well.”

Customers were also encouraged to write personal notes and letters to military service members, to be included with their donations. One anonymous donor left 35 holiday cards in a branch manager’s office, each with a $10 pre-paid calling card inside.

Bank of Canton’s campaign also featured employees’ photos and posts of gratitude on its Facebook page, and honored the bank’s customers with multiple drawings for $200 Thanksgiving dinners in the form of Stop & Shop gift cards. Darcy O’Brien and Sophie Dempsey of Canton were among the winners.