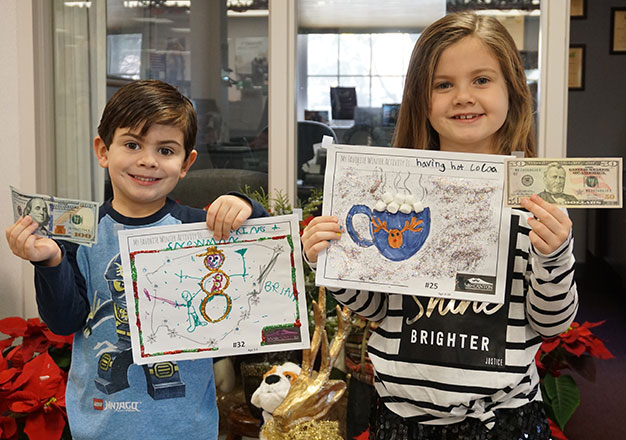 CANTON, Mass. (December 30, 2016) – Bank of Canton recently announced the winners of its 2016 holiday coloring/drawing contest. The contest, which was promoted in local papers, bank branches, and on Facebook, received 64 total entries from children in Canton, Stoughton and across the South Shore. Canton residents Brian O’Toole (age 5), Sophie O’Toole (age 7) and Remy Cohen (age 7), and Stoughton residents Abigail O’Connell (age 6) and Logan Cox (age 4), were among the prize winners.

Cash prizes of $200 (first place), $100 (second place) and $50 (third place) were awarded in each of three age brackets, for a total prize pool of $1,050. All entries can be viewed on Bank of Canton’s Facebook page, www.facebook.com/thebankofcanton.

The drawing contest was part of Bank of Canton’s annual holiday promotion, which also included a free public showing of The Muppet Christmas Carol movie at the bank’s 250-seat Canton auditorium and a “Mitten Tree” collection drive that benefitted local charities including The Home for Little Wanderers.