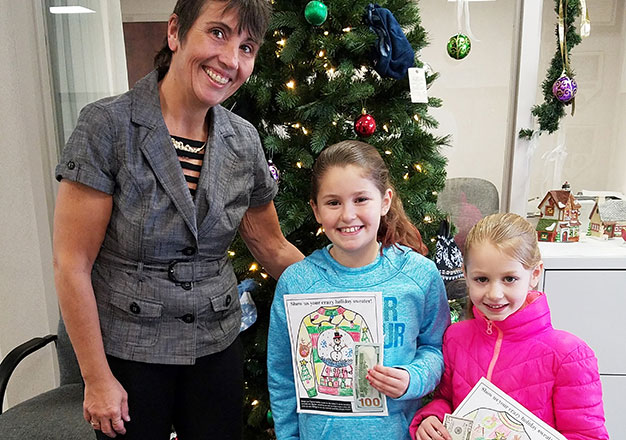 CANTON, Mass. (December 27, 2017) – Bank of Canton recently announced the twelve winners of its 2017 Holiday Drawing Contest, in which young artists between the ages of 3 and 14 created a “crazy holiday sweater” design on the bank’s entry form outline. The bank received 54 submissions from around the Greater Boston area.

Randolph resident Jeilin Polanco was one of four $50 runner-up prizewinners in the 3-7 age group, as was Hanson resident Emerson Walsh. Emerson’s older sister Cami Walsh won the $100 Facebook voting prize for her entry, which received the most Facebook Likes among the 8-14 age group.

Participants were challenged to be creative in their designs, and many young artists incorporated non-traditional materials such as glitter, feathers, beads, cotton balls, bells, pom-poms, letter cutouts, and holiday bows. Ten of the twelve winners were selected by the bank, while the other two winners were decided exclusively by the number of Likes their entries received on Facebook. All entries can be viewed on the bank’s Facebook page, www.facebook.com/thebankofcanton/.